First off, let me start by saying that I met RICK GRIMES!! Last Monday, at The New York Times – TimesTalks, Andrew Lincoln graced the stage with his charming personality and sense of humor, not to mention his adorable looks, all of which he hides behind a tough exterior on the hit AMC show, The Walking Dead (TWD). As the leader of survivors struggling in a post-apocalyptic, zombie-infested world, Grimes makes hard choices, facing his demons while slaying walkers and protecting his brood. Andrew Lincoln was as sweet as anyone can get, sharing his experiences on set and staying behind to meet his fans until every last one left the room. That made me love him and the show even more. Its stars seem to be a humble bunch, grateful for the program’s success, dedicated to making their mark.

Okay, enough about the actors. The true star of the show is the State of Georgia, with its scenic natural beauty, stunning Atlanta skyline, quaint small towns, old abandoned factories, and endless train tracks. On a recent trip to the Peach State, my boyfriend Scott J. and I rented a car and went on our own TWD adventure. We have compiled the nine must-see places on our Walking Dead Road Trip. We began in Atlanta and made our way south to Woodbury. Allow yourself at least 5-6 hours to fully appreciate the locations and have a blast!

Although not the actual CDC, which is located in downtown Atlanta, the building depicted in the show is actually the Cobb Energy Performing Arts Centre, about 11 miles northwest of the city. This massive steel blue building, glistening in the sunlight, is a sight to behold. Pulling up to it on a crisp winter day, where no other soul wandered, was befitting of an apocalypse. The deserted parking lot, the empty roads leading up to it, and the silence of the surroundings made us feel right on set, thanks to a quiet morning. The eeriest experience of all involved two cop cars pulling up to the lot as we took pictures, perhaps friends of Rick Grimes checking in on us. – LS

As the skyscrapers of Georgia’s capital city stretched and straddled I-85, we exited the highway to wide urban avenues before turning onto Jackson Street. Condominiums ran across corners and we felt like we were in suburbia. After snagging an easy parking spot, we walked a block to an overpass with a view so pivotal to The Walking Dead. Straight ahead stood vibrant Atlanta, pre-apocalypse, the light, midday traffic sometimes leaving the freeway barren for the perfect photo op. There were no charred, abandoned vehicles frozen in time, unable to vanquish the burning buildings; no heroic Rick Grimes on horseback searching for his family. And, most notably, no CGI to alter the road’s divergent lanes. There was a calm splendor to the sparkling sun — shining off the rising towers of this marvelous cosmopolitan landscape so alive — on an unseasonably warm December afternoon. – SJ 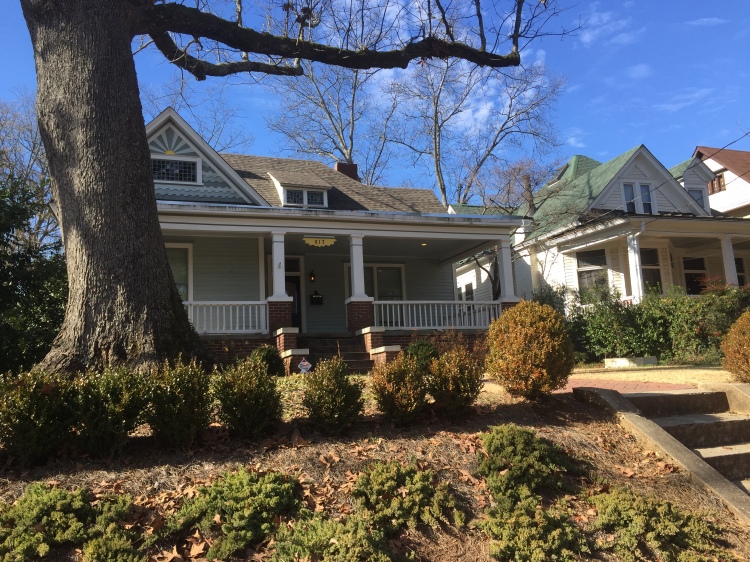 The charming little house that Rick and his family called home isn’t located in a small town like the show would like you to believe. It’s right in the heart of Atlanta, across the street from historic Grant Park and the Zoo. Stopping right in front of the house, we imagined Rick walking into his home to find it completely uninhabited. How I wish I could’ve been there for him (sorry, Scott)! Since the filming, the previously empty house had been renovated and sold. Keep off the property to avoid being fined for trespassing. – LS 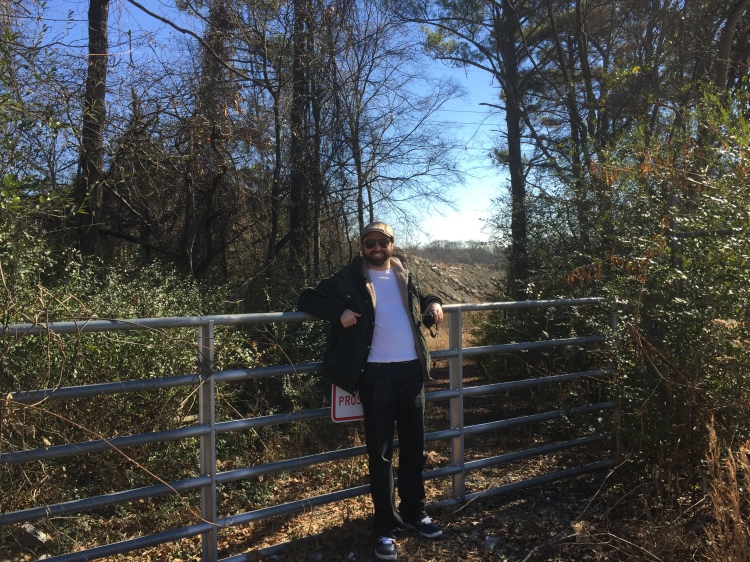 I was thrilled when I learned that the gorgeous setting of the survivor’s camp where Rick is reunited with Lori and Carl is located close to Atlanta. The site is a 100-year-old granite quarry named Bellwood, which is being converted into the 300-acre Westside Reservoir Park, holding 1.9 billion gallons of water. Within just twenty minutes from the city, we were driving past boarded up buildings and deserted houses. A dirt road took us to the GPS location of the quarry but, to our disappointment, we only stole a sliver of a glance. However, the trip to the site was well worth our time. – LS

An hour’s journey down I-285 delivered us to TWD “South,” the sites of those seasons shot in the woods. Our first stop was Steve’s Pharmacy, that ever-romantic spot where Maggie offers to have sex with Glenn. It’s actually a former children’s toy store with a barren storefront, but don’t let the “no photos” and “private property” signs deter you. Take a quick stroll to offer a silent appreciation for beautiful girls like Maggie who give regular guys a chance — even if it is the zombie apocalypse. Who knew a pregnancy test could be so sexy? – SJ

While you can’t actually raise a glass to Hershel’s memory (or your favorite dearly departed character), you can enjoy the rustic structure that served as his alcoholic stomping grounds and the site of an inevitable double murder (one of the show’s best scenes ever). It resembles a Wild West saloon on the outside, but it’s really a boarded up auction house down the street from Steve’s Pharmacy in a residential area. Don’t worry about the neighbors. They’re used to tourists spending a few minutes to snap a picture as if it were an historical site. Be sure to check out the adorable library next door. It has no significance to TWD, unless Norman Reedus (Daryl Dixon) borrowed a book (or tried to get his own on the shelves). – SJ 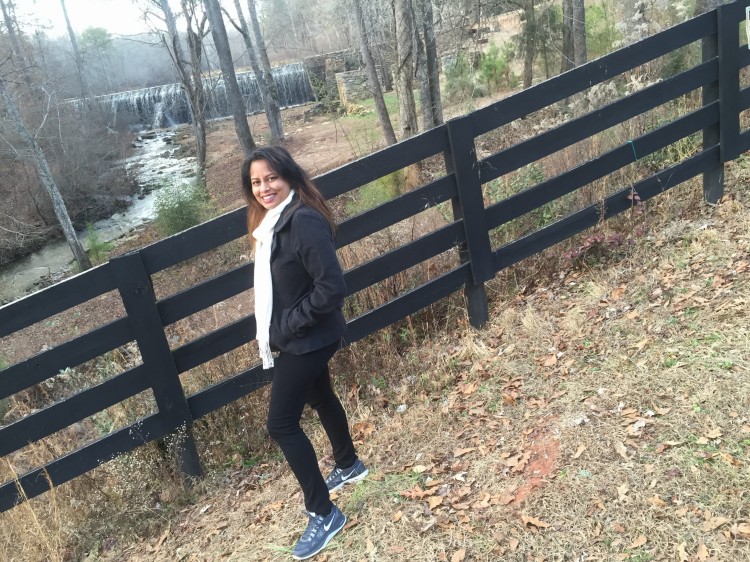 After walkers overran the farm (and Rick killed Shane in that awesome, moonlit scene), the survivors found respite in a campsite by a waterfall, which they later discover is next to the prison. In reality, the site isn’t deep in the woods, as one would’ve thought. Instead, it is a few feet from Elders Mill Road, a winding stretch in beautiful Senoia. Since it’s inside a gated community, it is best to play it safe and check it out from a safe distance (you never know with gun-loving southerners). As for the prison, it is located in the backlot of Raleigh Studios Atlanta (600 Chestlehurst Rd), and access is denied. – LS 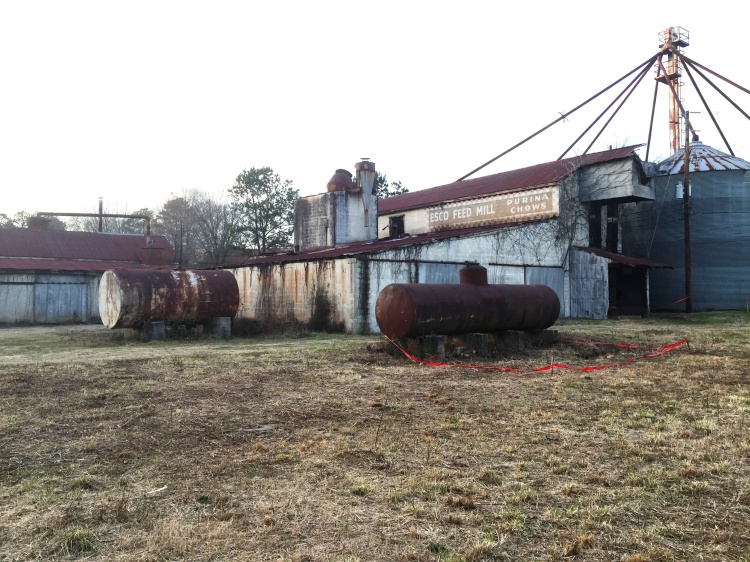 You probably never expected to wind up in Haralson, Georgia. No, it’s not the hometown of actor Woody Harrelson, but it was my absolute favorite site on our TWD Road Trip. It was difficult to find when driving on 74/85, but worth getting a little lost. Turn on either Line Creek Road or Magnolia Street, which run adjacent to Railroad Street — appropriately named for its tracks. They don’t lead to Terminus, but you can imagine Carol and Tyreese marching steadfastly towards salvation. Beyond the rails awaited the broken barns and rusty silo where Rick and the Governor attempt to broker peace. This former feed mill held an ominous aura; after a busload of tourists disappeared, I explored it alone as my traveling companion searched for a nearby restroom (props to the BBQ restaurant owner who courteously provided his facilities without a purchase). The burnt lumber and dilapidated edifices gave me shivers as I felt the presence of the Governor’s men who perished here. – SJ 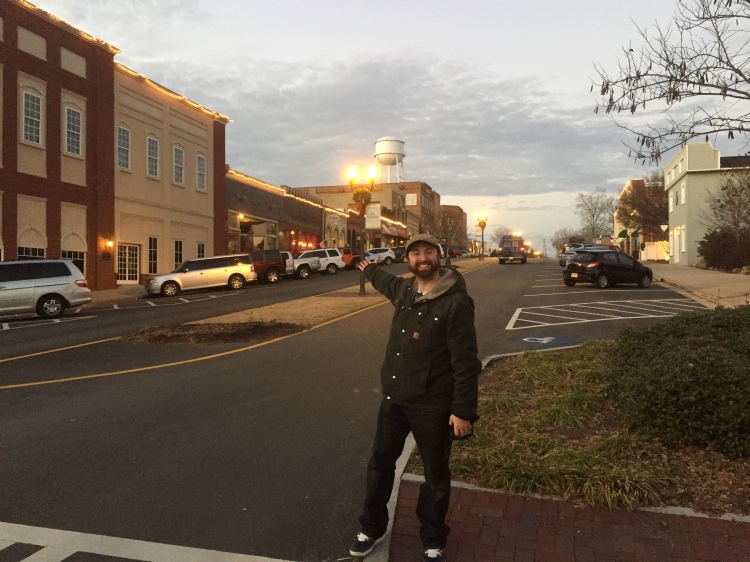 Perhaps my favorite stop on the tour, Senoia, GA – which fills in for fictional Woodbury – is an up and coming quaint town that attracts a lot of fans. Initially an overlooked area with a measly five shops, Main Street is now bustling with over 55 stores, several of which feature TWD memorabilia. The Walking Dead shirts, messenger bags, belts, and “I (heart) Daryl” souvenir pennies are aplenty here, in addition to high-end boutiques peddling $150 flannel shirts (perhaps catering to the stars of the show?). We ended our amazing TWD trip here with a hot beverage at Senoia Coffee & Café and headed back to Atlanta, leaving behind rural Georgia to follow our favorite characters to their next destination, wherever that may be in the coming months. – LS

Lavanya Sunkara is a writer, animal lover, and globetrotter based in New York City. She has written for The New York Times, Fodor’s, Architectural Digest, Shermans Travel, The Dodo, and many more in a career spanning eight years. She covers travel, eco-lifestyle, culture, pets, and wildlife conservation. View more posts

One thought on “Nine Must-See Sites from The Walking Dead”