The other night, I awoke from a deep sleep to silence. There was no cacophony of frogs, no giggling kookaburras, no pitter-patter of possums on the roof, and no cows marching across the lawn throwing water bowls around. There were definitely no wallabies clucking for their babies. These were the sounds of the bush, where I spent nine amazing, life-affirming days on my recent trip to Australia. It has been a week since I returned from my adventures Down Under and, while I am happy to be home, I am also shocked that I actually did it — that I got to realize a lifelong dream.

I spent the last part of 2013 anxious about my solo journey to Oz. I have wanted to visit Australia for years, but the long plane ride was daunting — not to mention all the horror stories about venomous snakes, spiders, and jellyfish that could kill you. But something about this continent drew me in; perhaps it was the lovely nature of the Aussies I met over the years, or the breathtaking natural beauty of the world’s biggest island.

When I finally decided to go for three weeks, I knew I wanted to spend part of it volunteering to help animals. It was by luck that I found Anne-Marie Dineen in Queensland in the WWOOF (Willing Workers on Organic Farms) Guidebook that lists farmers offering room and board in exchange for service. Anne-Marie, a vegan naturopath, runs the Oakview Wildlife Refuge near Gympie, a small town a three-hour train ride from Brisbane. I was excited when she told me she had orphaned wallaby joeys under her care.

In a matter of days, my life went from the snowy New York streets to the sunny, drought-ridden Queensland, where cows munched on yellow grass, and marsupials hopped across hills in a never-ending search of food. I had very few expectations of Oakview and minimal skills caring for wildlife. I didn’t know how many other volunteers there would be, but I suspected I wasn’t the only one. I was wrong. When I arrived, it was just Anne-Marie who picked me up in her dusty old Toyota to take me to her home, which sat on top of a hill overlooking 270 acres of the sanctuary, many kilometers away from civilization.

My first task was to feed adorable little Daisy and Mo, orphaned wallabies under a year old. When Daisy reached for my hand with her tiny claws, as she sucked on the milk bottle, all the fatigue from traveling for two days straight disappeared. Anne-Marie had nine wallaby babies under her care whose mothers were either victims of road accidents or killed for meat. The babies lived in a large enclosure where they roamed freely, learning life skills, and preparing for release into the wild. During my time here, I was responsible for helping take care of them, along with two rescued possums, one bandicoot, one bush rat, and a mama cow.

Each day, I awoke at 5:30 AM to feed the babies; I filled their water bowls and cleaned up after them. I watered the vegetable garden (where snakes sometimes liked to visit) and helped prepare food for the bandicoot and bush rat. In the evenings, Anne-Marie and I went on walkabouts in the bush to collect tiny branches with fresh leaves for the soon-to-be released possums. With food in a bucket, we went in search of the mama cow, who ventured farther and farther away from the house each day with her son. I also helped Anne-Marie with her herbal remedies website. I spent free time in the afternoons unwinding in a comfy chair in the veranda, watching the wild kangaroos lounging under the large mango tree in the front yard and thought about the many animals that Anne-Marie has rescued and released over the years.

I also fell in love. His name was Cooper, a feisty little wallaby who was just about ready to be released. He loved attention and followed me everywhere, posing for pictures and keeping me company on my walks to fill the water bowls up in the trees on the property of the released possums. Many visitors to Australia consider themselves lucky to get a close look at these fascinating animals. I feel incredibly blessed to have had a chance to care for them.

There were certainly days under the unforgiving sun when I wished I was back home, but seeing Anne-Marie in action as we both went on a rescue of the joey of a kangaroo hit by a car was a turning point. This woman has spent over a decade rescuing and rehabilitating wild animals, without expecting anything in return other than the satisfaction of seeing them hop on away into the bush. She spends her own money (and countless sleepless nights) and never backs away from an animal in need. It was an honor to learn, and be a witness to, the kindness this woman shows, even to the tiniest of animals, from bush rats to flying foxes. Knowing that people like that exist gives me faith in humanity.

Speaking of faith, it was because I had no set plans for my trip that I ended up in Sydney where I spent a few days with a New York friend who had moved there to attend the Hillsong Church Leadership College. When I set out to travel to multiple destinations in Australia, I left my schedule post-Oakview open, so that I could go wherever my heart desired. Sydney called my name. I craved the city life after roughing it out in the bush.

Thanks to Veronica’s vivacious energy and her willingness to accompany me all over Sydney, I was able to see all the top attractions, from the Opera House to the famous Bondi Beach (in the rain, no less). We dined at some of the best restaurants in town, savoring cuisines from Turkish to Thai, in the most diverse city in the country. We were in awe of the amazing sea creatures at the SeaLife Aquarium, which, to my delight, focused on shark conservation. While it rained on and off throughout my four days in Sydney, I was just happy to be in the company of Veronica and her international flatmates who welcomed me with open arms and shared their adopted city. 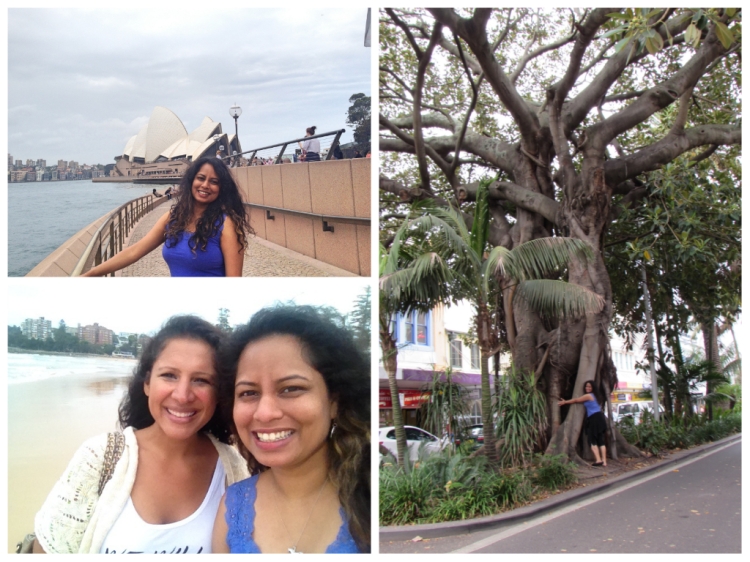 In search of sunny skies, I flew to the state of Victoria, where I stayed in Melbourne for five days to explore the surrounding areas. Even though I was traveling on my own, I was rarely alone. I met up with Sukhin, a fellow animal lover whom I friended on Facebook a few years ago. After a tour of beautiful Melbourne, and a refreshing South Melbourne beach outing, we set out on a Go West tour to Penguin Island the following day. We were two out of the hundreds of visitors flocking to the beach to watch the tiniest of the world’s penguins return to their homes after foraging for food in the ocean. It was no doubt a tourist trap, complete with rangers spewing directions on loud speakers and stores selling Penguin Parade rain ponchos and souvenirs. I wasn’t thrilled about the commercialization of these animals’ natural habitat, but it was a delight to see the little guys waddle across the beach calling for their lifelong mates.

With just two days left, I decided to go on a Wildlife Tours adventure down the coast on the Great Ocean Road, via Warrnambool to Grampians National Park. On the way to the 12 Apostles — another heavily visited tourist attraction — I was happy to have gone off the beaten path to lesser-known attractions. Our tour guide, John, took us to Mait’s Rest in the Otways where we traipsed through towering fern gardens and giant rainforest trees up to 300 years old. From there, we visited Kennett River, a seaside town known for the highest population of koalas, where visitors could get close enough to touch them, but are prohibited to do so. Later, we enjoyed more sights along the way from London Bridge to Loch Arc Gorge, where a hidden pathway leads to a picturesque beach. The best part of that day, aside from stunning scenery, was meeting fellow travelers all the way from Mexico and Germany. That night, we drank delicious Australian wine and shared our trip stories, getting very little sleep before an invigorating, early morning hike in Grampians National Park.

The best part of traveling is meeting new people and making new memories with old friends. In addition to the wonderful moments that I shared with Anne-Marie, Veronica, Sukhin and new friends on my tours, I was fortunate to be in the company of an amazing woman: Susan Cook. It was a chance meeting. I needed an Airbnb host in Gympie for one night after my time at the refuge and was surprised to find Susan, a fellow animal-loving journalist passionate about adventure. She and I bonded immediately over a delicious meal she generously prepared. When I left for the train the following morning, Susan handed me a ziplock bag with an avocado sandwich, an apple and few chocolates for the train ride. Even though I was 10,000 miles from my base, I felt right at home. Susan and I decided to meet again one day to explore the western part of Australia where we could go swimming with whale sharks.

Australia is a country that you don’t just visit once. Despite the harsh conditions and dangers, it beckons you with its charming wildlife and kind, fun loving people. Now, when I go to sleep, all these amazing individuals (including the furry ones) are awake on the other side of the world, going on about their lives. I feel incredibly fortunate to be able to share their lives for just a short while and enrich my own.

Lavanya Sunkara is a writer, animal lover, and globetrotter based in New York City. She has written for The New York Times, Fodor’s, Architectural Digest, Shermans Travel, The Dodo, and many more in a career spanning eight years. She covers travel, eco-lifestyle, culture, pets, and wildlife conservation. View more posts